Hotel Horror Stories:  as soon as I saw that title I knew I wanted to be involved.  There’s just something we all seem to ignore about hotels, namely that thousands of people stay in their rooms every day/week/month/year (depending on size) and turnaround times between occupants HAS to be tight.  If you really feel like giving yourself some serious second thoughts about ever staying in a hotel again, take a look at this Quora feed (but promise you’ll come back after).  We kicked off with the question we all want to see answers to.

What is the biggest surprise you have ever found in your hotel room, or shower?

Of course the usual combination of “creatures that shouldn’t be there” came up, including “A dead cockroach lying in the middle of the shower 🙁 At least it was dead!” by @SunCabo and a “Frog in the bog in Kanga Camp” which @thesafaririch was kind enough to show us with this accompanying visual representation: 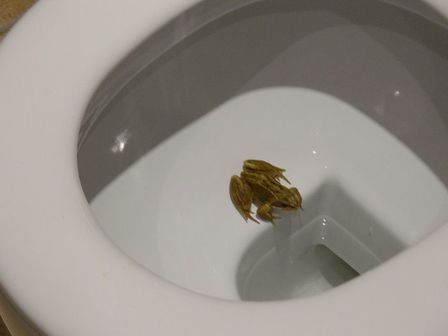 Something stranger happened to @AtTheDrop, who found “Another person!  That I didn’t know”.  Who was in the right place?

Personally I’m always surprised to find a completely unstocked minibar – does that count?

@always5star showed us almost the definition of poor service “when customer service thought this was the way to fix a leaky plumbing”.  Points for resourcefulness though.  Full points. 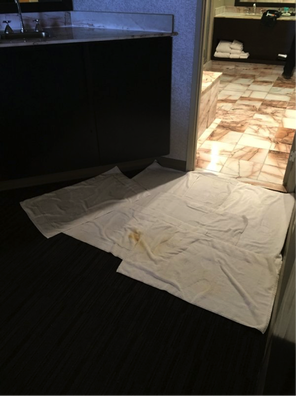 @bigfatheadz gave us a solution to never being on the receiving end of poor service again with“Tbf never had a hotel customer service horror story. Hubby does say i’m terrifying when I get angry so maybe that’s why”.  I knew that was the key – you’ve just got to make sure they know it before anything can possibly go wrong.  How do you do that?

@LuxuryTravelMom called out an offender and made a valid point that sometimes things go wrong, but you have to deal with it properly: “Probably not just the bad service@bolongobay, but the reaction of management when I gave them a negative review”.  I’d love to see that review (and the reaction).

What’s the best thing a hotel has ever done to make up for a mistake?

We love an upgrade, and @EveLovesLuxury summed up the mood nicely:  “Saying those three magic words ‘It’s on us.”  Always nice to hear.  Although what means more to you, an effective refund or a new experience you weren’t going to have?  I know some people would prefer the latter, and @SoloTravelGoals seem to be of that persuasion:  “Got a free rafting trip after a mixup in Indonesia once. The experience made up for everything.”  @JetsettingBen‘s best outcome was having the hotel “wave the internet access charge, which otherwise would have been more than $80! I was v. happy. :)”.  That’s always nice, but I would probably have been annoyed at the fact that there was at some point going to be an internet access charge.  Having it knocked off my bill would probably have just returned me to neutral!

Either way an important point comes up – sometimes, your opinion of a service provider (be it a hotel or anything else) is actually higher given an issue and the success resolution of that issue than it would have been had there not been a problem to begin with.  Something for all to keep in mind (although I wouldn’t recommend deliberately engineering problems just so you can solve them!).

What do you do when you arrive to a hotel that is NOT as advertised?

I assume there is sometimes the possibility of an upside (the hotel is much nicer than advertised) but that didn’t seem to elicit too many responses – I wonder why? 🙂

@SilverSpoonLDN  told us that “I’ve only ever check out of somewhere once”.  Where and why?  We all want to know!  @FoodPowerLDN had a relaxed but effective attitude:  “Laugh. Relax. Change the next day & in the meantime go out for a REALLY good meal to make up for the disappointment”.  I asked what happens if the meal isn’t up to scratch either – “I put more effort into researching the right restaurants than the right hotels & I always ask people in the know”.  I would probably agree.

My favourite response though came from @amberlair  “Ask for refund + go away! We booked a hotel in India that photoshopped their dirty neighbourhood into a beautiful garden!”  I just love the audacity of it – as if no-one would notice!  Again, points for resourcefulness.

And so we moved on to the final question that might provide some useful advice for both hotels and their guests:  What’s your best advice for handling hotel mishaps?

A range of responses with some great tips. For hotels @amberlair laid out the basics of “Listening, incentives, free stays and free champagne!!!”  Can’t go too wrong there.  For guests, a few pearls of wisdom including:

@BCpostergirl:  “Always hold your composure and be polite.”

@EveLovesLuxury:  “Know the difference between an honest mistake and rudeness/incompetence, and don’t take it out on anyone making minimum wage.”

All spot on.  I think @Suiteness summed it up nicely with “Mistakes happen. Helps to be polite and patient, give the management a chance to make it up to you”.  I think that’s true of a lot of situations – give people a chance first.  What happens after that chance though is up to you :).

Thanks to everyone involved in #luxtravelchat again as usual! Join in on Thursdays to hear about all things luxury, hear travel stories and get the inside scoop!

Concierge99 makes it ridiculously easy for you to find ways to treat yourself by finding and booking treats and services while away from home, making it feel more like home wherever you are in the world.

Enjoying the digital nomad lifestyle while launching concierge99.com: Making it easy for travellers to find and book holiday treats!

Where to beautifully sleep in Cartagena, Colombia’s vibrant caribbean city

The Travellers Guide To The World

Voyager, created by travelers for travelers. After years of adventures it felt time to create a community for explorers alike. We all want to be the first to discover the un-walked path, to meet locals and embrace cultures, everything that makes us a traveler and not a tourist, Voyager is the explorers home to share these stories, via written blogs, videos and pictures.